City Budget Shortfall: An Argument for the Defunding of the PPD and the Taxation of UPMC 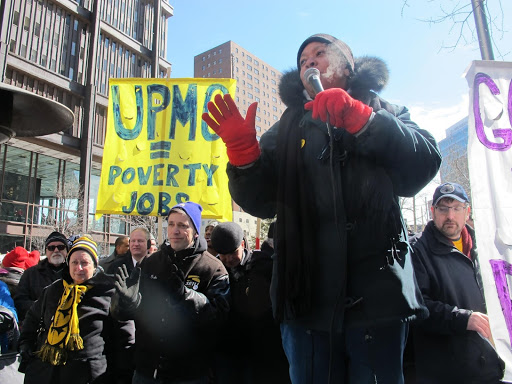 The devastating impact of the COVID-19 pandemic has made a massive budget shortfall in the city of Pittsburgh of around $100 million. In my opinion, there is only one way that the city can make up this deficit without hurting the working-class people within it any more than they are already being hurt during this pandemic.

This pandemic has severely hurt millions of working-class people across the country. Whether it is the over 210,000 people who have died or the massive numbers of workers who lost their jobs (many of whom are still unemployed and some of whom are going to start losing their unemployment benefits), the virus has caused wide-swept damage throughout America. Pittsburgh is in no way immune to the harmful impact of this pandemic. Its damage is apparent in local businesses that have closed, such as The Original Hotdog Shop (The O) in Oakland, and the 849 people in Allegheny County who have been evicted just last month. The effects of the pandemic on the city will be felt for years to come and the city’s expected budget shortfall of around $100 million is possibly the clearest example of this.

A $100 million shortfall is harmful to any city, but is especially harmful to a city like Pittsburgh, whose budget is usually only around $600 million (at least in recent years). This shortfall can largely be explained by the loss of tax revenue, which makes up a vast majority of the revenue the city makes annually. Because many Pittsburghers have lost a reliable source of income, either due to them losing their jobs entirely or the place they work at being closed temporarily during the lockdown, people haven’t been able to pay the amount of taxes they usually can. This, on top of unexpected expenditures due to the pandemic, has created this $100 million shortfall.

The city will eventually need to find a way to make up for this massive budget lost in the 2021 budget. I believe the city needs to pressure the state to remove UPMC’s non-profit status to properly tax it, it needs to raise the taxes on big business within the city like Google, and it needs to defund the overly bloated budget of the Pittsburgh Police Department (PPD).

Now, why do I think that this is the best option for the working-class of Pittsburgh? Well, it partly has to do with the fact that the city has very few options on how to regain money to make up for this shortfall. It can either raise taxes, or it can reallocate resources from certain parts of the budget to other parts of the budget to make up for the funds they have lost. The city has a limited amount of choices in ways it can make up this budget and, excluding the option I already proposed, the city will either have to raise taxes on the working-class people within it and/or cut the budget of various programs within the city. The only real way for the city to avoid this from happening would be by taxing UPMC and other big businesses in the city and defunding the police.

Despite UPMC’s non-profit status,  it works basically as a for-profit company, similar to other “nonprofits” like the College Board who, despite their qualification as a 501c3 – which is the qualifications that an organization has to follow in order to be considered as a non-profit, put profit over the service they provide.

No nonprofit should have a CEO who has a salary of almost $9 million a year. No non-profit should be complicit in gentrification in the same way UPMC is, nor should it be the biggest property owner in Allegheny County. UPMC expansion into neighborhoods such as Oakland and Uptown or townships like Munhall has allowed the company to make millions of dollars off of the working-class people who live near or around it. Despite that, UPMC pays very little in property taxes in those communities meaning despite the profit it makes off those communities it gives very little back to them.

No non-profit should treat their workers so horribly or be so anti-union. UPMC is notoriously anti-union, and has done almost anything in its power to crush and silence the development of unions within its hospitals which we can even see today with the struggle at Mercy. In 2012 the National Labor Relations Board (NLRB) did an investigation into UPMC after employees who were trying to unionize complained about UPMC trying to illegally mess with their union. According to Robert Chester, the NLRB regional director of Pittsburgh, these were the most amount of allegations he had seen in his entire career, and UPMC was charged for a lot of them which caused them to even hire back some employees they had fired. The UPMC employees’ reasons for unionizing range from low wages, bad job security, better access to PPE, and handling of the COVID pandemic, and better healthcare benefits which is maybe the most ridiculous because UPMC is a healthcare company.

I think if UPMC wishes to openly act like the big corporation it knows it is then it should be taxed like one. I think our city government should also raise the taxes on big businesses within the city like Google, many of whom have very similar issues like UPMC and heavily contribute to the gentrification within the city.

The history of police within America is pretty complex, but, to grossly simplify, our modern policing system has its origins in two institutions; the first, the slave patrols of the Antebellum South, groups of usually working-class white men who work for a plantation owner and who would work to control and police slaves, especially ones who escaped or acted in ways that the owner of the plantation didn’t like, and the latter, the taxpayer-funded police of urban Northern cities. These police were established largely to protect the property of wealthy merchants and capitalists and after the Civil War spread to most American cities and began to focus on heavily policing immigrant populations and, often violently, breaking unions.

These racist and classist origins of the police are still as relevant as ever. It is a well-known fact that police disproportionately target working-class communities and specifically working-class communities of color. We don’t have to look into the past to see examples of these types of policing anywhere in the country and especially not in Pittsburgh where just two years ago Antwon Rose Jr. was brutally murdered. Even during the massive Black Lives Matter movement wave that occurred in Pittsburgh during the summer, police still committed acts of police brutality largely to serve the class interest of the city government. It is not a coincidence that most of the violent acts committed by the police during these protests have been in neighborhoods that make the city a lot of money like Downtown or East Liberty.

This harmful role the police play in our society has by no means been lessened by the pandemic. Not only have police continued to brutalize and kill black people, from George Floyd to Jacob Blake to Breonna Taylor, but the economic fallout from the pandemic has revealed some of the other worst ways they act in our society. This is shown best with the role they play in evictions. Cops often serve as the enforcers of evictions, sometimes violently removing tenants from the place they had been living at. As mentioned earlier, in Allegheny County 849 people have been evicted in September alone despite the CDC imposed eviction moratorium.

While most people recognize that the police do act in these unjust ways the idea of defunding the police still sounds very unappealing because it sounds like you want to make society less safe. And while I can certainly understand that perspective as crime is a very pressuring issue that does deeply impact many people’s lives in very harmful ways, it is also important to recognize that police don’t directly address the cause of crime they address it after it happens. Addressing crime at its roots is much better at preventing it from happening in the first place but yet it is something that our government, both local and federal, regularly does not spend any money on.  The root of a large amount of crime is poverty and often the best way to treat crime is through the treatment of poverty.

I believe that more money going into funding things like healthcare, social services, affordable housing, public education, and other services and programs in the city would be much better at addressing crime at its roots.

Defunding of the Pittsburgh police budget by 50%, the amount that Peduto has raised it since his time in the office most of which has gone towards unnecessary militarization of the police, and the reallocation of those funds towards these programs that actually address crime at its roots and undeniably benefit every community.

These demands may seem like they will bring big changes to our city, and it is likely that they will but that isn’t a bad thing. Our city, like our entire country, has massive issues, and we need to work to change them and taxing UPMC and defunding the police is a good first step.