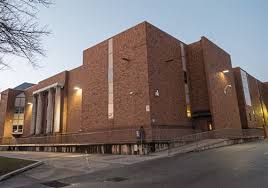 The Obama Academy of International Studies in East Liberty.

“This season has been nothing short of an uphill battle.” So begins the video Lauren Close, a senior captain on the Obama Academy girls’ high school soccer team, posted to her Instagram on October 12. The five-minute video outlines the issues the team has been facing since the beginning of their summer preseason. With the retirement of their longtime coach last December, the team expected a new replacement soon, but the district did not provide them with one until September 1st.

Zoeie McKnight is a senior on the team who helped to organize things in the absence of a coach.  “During that time, we could not hold ‘official’ practices so the captains and I did ‘senior sessions’ throughout August. We only had a bag of balls and a few pinnies and cones. We had to practice at a local park.”  Though the team attempted to reach out for help from the administration, as well as the boys’ soccer team, McKnight says they were shut down.

“All throughout that time, the boys’ team was having practices…when we reached out to the school about our coaching situation, they said they were working on it, but they had already been working on it for 8 months.”

Having to face an unusual level of responsibility on the team also took a toll on them mentally. The seniors had a lot of issues on their plate, from running practices to designing lineups and handling issues of bullying among the underclassman.

“It was very stressful,” McKnight said about the situation. Though the team did receive a new coach on September 1st, they left a month later, leaving the team unsupervised once again.

Close’s video also addresses the sexism inherent in the team’s treatment. In fact, their situation violates Title IX, a federal statute that prevents sex discrimination in institutes funded by federal money, such as public schools. Title IX states that “No person in the United States shall, on the basis of sex, be excluded from participation in, be denied the benefits of, or be subjected to discrimination under any education program or activity receiving federal financial assistance.”

The girls’ team has been trying to get in contact with their administrators throughout the past few months, but have not received any answers they consider satisfactory. Obama’s principal, the athletic director of Obama, U-Prep, and SciTech, and the PPS athletic director were all reached out to for comment, but declined to respond.

Despite the immense amount of obstacles they have had to deal with, the team has still been able to finish out their season. Close expresses her pride in the last moments of her video.