“Emily In Paris” Was Awful. I Loved it. 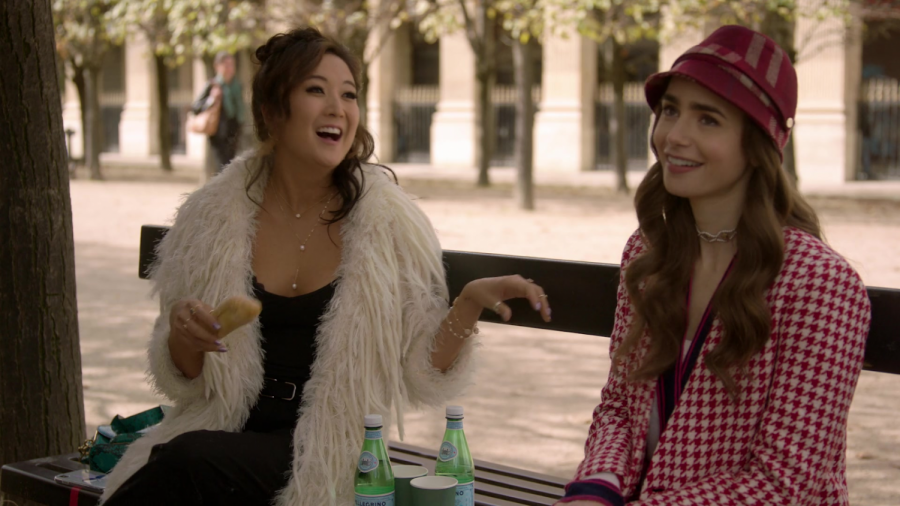 Mindy (Ashley Park) and Emily (Lily Collins) in Paris. Mindy was one of the redeeming characters of the show.

In the beginning of October, Netflix released the 10 episode show, Emily In Paris. It immediately became the internet’s favorite hate-watch. It seems that everything — the fashion, the characters, the plot — was mostly horrible, with just enough greatness that it kept people glued to the screen.

The show follows Chicagoan Emily Cooper (Lily Collins) as she moves to Paris for a job with her marketing firm. She is thereafter entangled in both affairs of business and of the heart, often with the same people. I watched the trailer before it was released, and predicted the plot would be a classic affluent White American girl moves to Europe and experiences a very stereotypical version of [insert European city here] while ~finding herself~ storyline. I was basically right. Emily experiences perhaps the least nuanced version of Paris one could have thought of. Why do I know this? I have never been to Paris in my life, yet I learned nothing about the city while watching the show.

In addition to portraying a glamourized version of Paris, basically everything that happens is unrealistic. To start, social media does not work like the show made it seem. Emily starts off with a small Instagram account, but once she changes the username to @emilyinparis and posts a picture of a croissant, she gains thousands of followers. Honestly, I’m still confused about how she skyrocketed to social media fame. It just doesn’t make sense. Even the littlest details, like Emily’s first cab ride around the city where she sees all the sites, are plainly absurd, as pointed out by @JulesDrmnn on Twitter:

Also, the fashion choices on this show added heavily to its cringe-factor. There were almost always too many patterns on Emily’s outfits, which brought me back to elementary school when most of my wardrobe came from Justice. Plus: who in their right mind wears an Eiffel Tower shirt, in Paris, on their first day of work? Emily Cooper, that’s who.

The most significant error in the show, however, was a recurring pattern in the plot. Repeatedly, Emily would mess something up for other characters, but never received any repercussions. She simply floats through her life in Paris without a scratch. The most notable example of this involves a love triangle between Emily, her Parisian friend Camille (Camille Razat), and Camille’s boyfriend Gabriel (Lucas Bravo). Emily repeatedly goes behind Camille’s back in pursuing the very attractive Gabriel. And, not surprisingly, there was absolutely no punishment for Emily — maybe this will be addressed in season two.

For all that was wrong with the show, there were certainly great things about it. Its sex-positive attitude, many funny moments, and highly entertaining side-characters (namely Ashely Park as Emily’s friend Mindy, and Emily’s co-workers, Luc [Bruno Gouery] and Julien [Samuel Arnol]) were part of the greatness of the show. Also, as painful as it was, it was wonderful to see Emily get to experience life in another country; in our pandemic, when leaving the hellscape of America feels impossible, I was living vicariously through her.

I mostly watched Emily in Paris during little moments: between online classes, getting ready for bed, while eating a snack. I zoned out into Emily’s Paris without even having to think about it. Bad TV shows are always reliable distractions from the woes of life. In a time of endless anxiety due to the pandemic, the election, and the world on fire, Emily in Paris was the stupid, wonderful, ridiculous show I needed.

So, my final review? You definitely shouldn’t watch Emily in Paris — but I highly recommend you do.