President Trump has stubbornly refused to mandate, encourage, or even demonstrate mask-wearing. (Donald Trump has COVID. What risk does he face?, Deccan Herald, 2020)

News of President Trump catching the coronavirus has kindled out around the country as quickly as it had flared up, due to the dismissive attitude the president took on regarding his own health. Only a few days after his hospitalization in the Walter Reed National Military Medical Center, President Donald Trump returned to the White House. Trump’s departure from Walter Reed, despite forewarnings from doctors and medical professionals, unfortunately aligns with his dismissive policy to the global pandemic that has devastated the nation. “Don’t let it [Covid-19] dominate your life,” Trump had told Twitter after his release. “We have developed, under the Trump Administration, some really great drugs & knowledge.”

Trump’s response to the Covid-19 pandemic has been widely considered lacking by experts across the country. From ignoring the early warning signs in January, to delaying mandates for social distancing, to rushing reopening of businesses, to holding large, indoor rallies, the president has fed the coronavirus flame directly. A Stanford study linked Trump’s rallies to 30,000 cases and 700 deaths. Despite scatterings of hope that his own sickness would help him recognize the gravity of the pandemic, Trump, upon emerging from his advanced medical care, brazenly told Twitter, “Don’t be afraid of Covid.” He has likened the virus to flu season, claiming that America is, “learning to live with Covid,” as opposed to closing down the country, as advised by medical professionals.

On a local level, the effects of a careless and uninformed presidency are painfully apparent. In Alleghany county, there have been a total of 170,000 cases and over 8,300 deaths. Schools have been moved online, and Pittsburgh has lost both beloved businesses and necessary jobs. The Pittsburgh Post-Gazette reported a 16.8% unemployment rate in April, the highest it has been since 1990 according to the state Bureau of Labor and Industry.

Julia McQuiston, a senior at Allderdice, talked about what her life looked like now seven months into the devastating pandemic. “Everything just stopped. Soccer, school, I’m just at my house all the time.”

She added her opinion on the way the Trump administration’s response to the virus had worsened the effects of the pandemic, both on a national level and in her own city. “I understand even if we did have, like, even if Barack Obama was president, things wouldn’t have been perfect . . . but one of the reasons that it’s been so bad is that the person who’s leading our country is totally downgrading the virus,” she said.

McQuiston mentioned Kristen Urquiza, who had spoken out at the Democratic National Convention about her father, who had trusted Trump’s casual take on corona and proceeded to go out with his friends to a karaoke night, then contracting Covid and dying shortly thereafter. “There’s a bunch of people who look up to him, and agree with what he has to say, and think that their decisions don’t affect other people and the coronavirus isn’t that bad,” said McQuiston.

Senior Niv Loberant explained the connections between the pandemic and mental health issues. “I’m grateful that the pandemic hasn’t impacted my ability to get food or have a roof over my head . . . but mentally, it hasn’t done anything good. People with depression know that staying inside and not seeing people makes it worse, and needing to do that for  6 months has really impacted my mental health.” 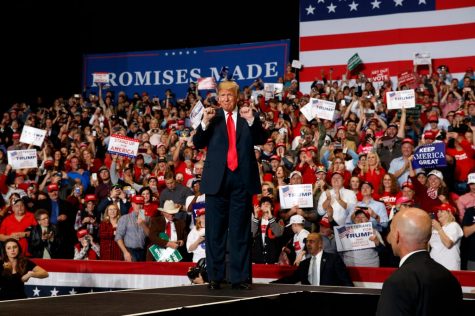 In regards to the Trump administration, Loberant expressed that the response was lacking, and had therefore led the pandemic to spiral even more out of hand than it would have under stricter regulation. “They [the Trump administration] didn’t shut things down quick enough and didn’t admit how serious the virus really is . . . if he [Trump] would have told everyone to wear masks and people listened to him I don’t think it would be this bad.”

“Scientists have said that if everyone would just social distance and wear masks for a few weeks that would benefit so much but he doesn’t listen to them,” she added.

As national news alerts us that the coronavirus is surging around the country and even within the White House doors, it’s important to keep the local connections in mind. The harm caused by the capital’s response to the pandemic can be seen in our very own cities, and we must remain aware and vigilant against it.