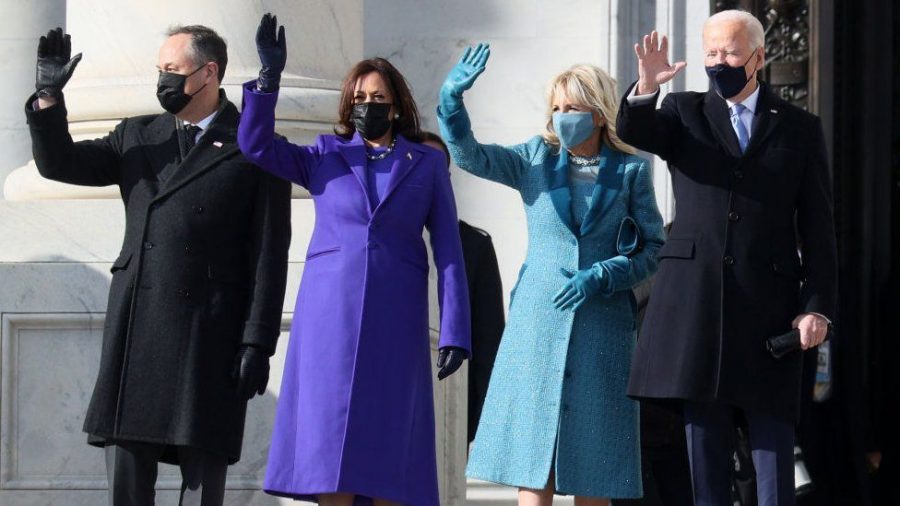 The way in which society values a woman’s fashion choices as opposed to that of a man’s has long been a topic of discussion — and rightfully so. Our history consists of centuries of women being seen and not heard and therefore, reduced to their visual appearance. Some women love fashion. Some hate it. Some are simply indifferent. For some, it is not that fashion itself is so off-putting, but rather the idea that appearance is the only valued measure of a woman. Today, women have more rights and more power than ever before. They are shattering glass ceilings right and left (Exhibit A: Madam Vice President Kamala Harris). Yet, oftentimes, the conversation still comes down to their attire. Therefore, the question inevitably becomes… Does it matter what women in politics wear?

The answer is, regardless of the ethical question of if it should matter, like it or not — fashion is political.

After four years of an administration lacking inclusivity, diversity, decency and respect, on inauguration day, the women of the Biden administration embraced the inevitable attention that comes with being a woman in politics, and channeled it for a cause much greater than the outfit of the day.

They signaled to us that a new era of America is coming.

Twenty-seven year old Naomi Biden, the oldest of the Biden granddaughters, donned an all white pant suit, complete with a matching floor-length coat, heels and leather gloves. The Columbia Law graduate’s stunning outfit displayed a sophisticated sense of style and paid homage to the suffragette movement.

Ashley Biden understands the power of fashion. Biden, a social worker with a focus on criminal justice reform, founded Livelihood in 2017. The fashion brand focuses on combating income and racial inequality through ethically produced, American-made styles. Though she chose a simple navy outfit for the inaugural ceremony, Biden donned a tuxedo-inspired look (reportedly by Ralph Lauren) for the night’s events. She paired the outfit with an undone bow tie, a matching black face mask and T-Strap Chloe Gosselin stilettos. The internet instantly went into a frenzy, dubbing her the breakout fashion star of the festivities. The traditional menswear attire, reinvented with a  feminine twist, transcends the constraining societal restrictions put on a woman’s appearance, especially a woman in politics — where, up until quite recently, most anything besides a dress was an anomaly.

For the inaugural ceremony, incoming First Lady Dr. Jill Biden chose a tweed blue coat and dress, embellished with Swarovski crystals, by Markraian, a relatively new American brand based in New York City. The look was completed with a pair of matching gloves and a face mask. Through her attire, she reemphasized her commitment to promoting female run businesses and American made creations. Moreover, the color blue holds a particular weight as well. Markarian founder and creative director Alexandra O’Neill says the color was chosen purposefully to symbolize, “loyalty, confidence and stability.”

On inauguration night, the First Lady donned a white dress, along with a matching pair of gloves, coat and face mask. The white color palette served as yet another homage to the suffragette movement. Flowers of each state and territory were present on the ensemble, an emphasis on the importance of national unification (with the Delaware state flower placed closest to her heart). Additionally, the dress was made of existing fabrics to reduce the environmental impact. The inner lining of the coat was embroidered with a quote by Benjamin Franklin, “Tell me and I forget. Teach me and I remember. Involve me and I learn.” The addition of the quote is a love letter to her profession. Biden is the first First Lady to hold a full-time job outside of the White House (she plans to continue teaching as a professor of writing at Northern Virginia Community College). The President said it best: “Teaching is not what Jill does, it’s who she is.” The look was designed by Uruguayan immigrant and New York City based designer, Gabriela Hearst.

The evening’s fashion choice was in reverence of the women who fought so courageously for the freedoms exercised by women across the nation today, in the work of national unification, in preservation of this planet, in dedication to Dr. Biden’s lifelong calling of education and in recognition of the great contribution immigrants make to our country.

Kamala Harris made history (more like herstory) when she was sworn in as the first female, first Black and first South Asian Vice President of the United States of America. For the momentous events leading up to, during and after the ceremony, the Vice President chose to champion young, up and coming designers of color.

To the COVID-19 memorial service, Harris chose a camel coat by Kerby Jean-Raymond, a Haitian-American designer and founder of Pyer Moss. In addition to being outspoken about police brutality, in the early weeks of the pandemic, when obtaining additional personal protective equipment (PPE) was nearly impossible for medical professionals, Pyer Moss converted their studio into a PPE donation center and set aside five thousand dollars to obtain the supplies. Moreover, the brand donated fifty thousand dollars to help ensure that female and minority owned small businesses survived the economic impact of the pandemic.

For the historical inaugural ceremony, the Vice President donned a Christopher John Rogers purple dress with a matching coat, a pair of gloves and heeled pumps. Rogers, a twenty-seven year old emerging Black designer, was named 2020 Council of Fashion Designers of America (CFDA) American Emerging Designer of the Year. He draws much of his inspiration from the monochromatic looks he vividly recalls seeing as a child at Sunday church with his grandmother. And of course, the color of her outfit does not lack in symbolism. Purple was another staple color of the suffragette movement. One of Harris’ Presidential campaign colors was purple. The color is also an ode to Shirley Chisholm, the first Black Congresswoman and the first Black woman to seek the nomination for President from a major political party. Additionally, purple can only be made by the combination of red and blue, making her look a visual call for unity.

Sergio Hudson, an emerging Black designer and the creator of Harris’ “Celebrating America” look, remarked that as a father of Black daughters, the significance of Harris’ inauguration was indescribable. Harris herself said it best when she accepted victory for the Vice Presidency in November, “To the children of our country, regardless of your gender, our country has sent you a clear message: dream with ambition, lead with conviction and see yourselves in a way that others may not, simply because they have never seen it before — but know that we will applaud you every step of the way.” Hudson’s daughters, and young girls all across America, will grow up in a country with a Vice President who looks like them — who not only tells them they can be anything, but shows them. Hudson designed a black sequined dress and a floor length tuxedo-inspired coat for the night’s celebration. He says, “the liquid sequins give her glamour and shine, because her influence and the way she’s broken barriers is a light for so many of us. She shines so we can all shine.”

It’s true — fashion is not the endgame for any administration, nor should it be. The Biden administration is entering the White House as a global pandemic ravages our nation. They are assuming power of a severely polarized country that continues to be plagued by climate change and the devastating injustices of systemic racism. Therefore, on that beautiful January day, the women chose to use fashion to pay homage to those that came before them, challenge societal standards, project an unmatched spotlight on deserving artists, make political and moral statements and indicate to us what is to come over the next four years.

So, now that Vice President Harris’ purple ensemble or First Lady Dr. Jill Biden’s “Celebrating America” look has your attention, the women of the Biden administration have a message for you: it’s a new day in America — and the fashion is just the beginning.