Late Night Double Feature: Why “Rocky Horror” Is Still Around 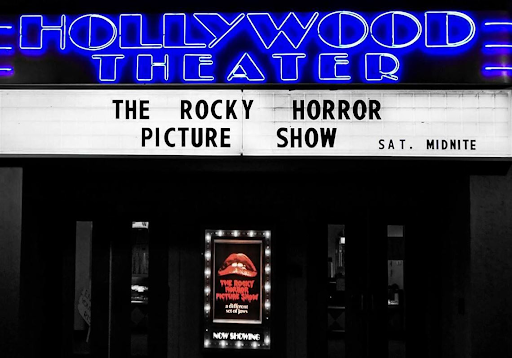 A few weeks ago, the world marked forty-six years since the United States release of the longest-running movie of all time-“The Rocky Horror Picture Show”. This campy cult classic has been screened in theaters for almost fifty years. As Halloween is just around the corner, it is the perfect time to dive into the history of the comedy-horror musical, what has contributed to its endurance, and what it means to its legions of fans.

The show began as a stage musical, opening in 1973 at the Royal Court Theater in London, before being adapted into a movie, with many actors from the stage version reprising roles in the film. This included Tim Curry as the main antagonist (or protagonist, depending on who you ask) Dr. Frank N. Furter, for his first-ever part in a movie.

It flopped at the box office, but when it was re-released as a midnight movie, it began to grow in popularity. Groups of people returned again and again. Audience members began to dress up as the characters, bring rice and toilet paper to throw at specific moments in the movie, and call out jokes and one-liners ( now known as “callbacks”) between the dialogue.

The movie itself is low-budget, seemingly plotless and confusing upon the first watch, and somewhat problematic by today’s standards. But as a product of its time, it is radical. The conservative, straightedge protagonists Brad and Janet become liberated over the course of a night with Frank N. Furter and the inhabitants of his castle, who are vibrant, weird, and open about their sexuality. Themes and characters that were never explored in mainstream culture at the time were being played on movie screens all over the country every weekend at midnight. For forty-six years, those theaters have been a safe place for the outcasts and misfits of society, particularly queer youth.

An important part of the culture surrounding Rocky Horror is the shadow casts, groups of actors who lip sync and perform the movie scene for scene in front of the screen. Nearly every city in America, and many in other countries, have a shadow cast- including Pittsburgh.

The Pittsburgh cast has been around, with various locations, names, and ups and downs, since the 1980s, but today they perform as the Junior Chamber of Commerce Players, or JCCP, at the Hollywood Theater in Dormont. From those who watched the film once and then auditioned to longtime theater veterans, the stories of today’s shadow casters vary.

When asked what they think has caused the longevity of Rocky Horror, the answers are varied as well, but all carry the same basic message–Rocky Horror is a timeless community, a haven for anyone who does not fit in.

“It gives people a chance to be their authentic selves,” says one actor, Ramona Ryder. “It’s a movie that says ‘be who you wanna be!’”

Cindy Gaynard, another JCCP member and a Rocky fan since 2000, describes attending the show soon after the September 11 attacks: “We came together in that theater and we mourned, laughed and screamed together. It was therapeutic and what everyone needed at the time.”

A performer who goes by Ponyboy says that “Rocky Horror is a place for the weirdos and rejects of society. You find it at the intersection between punk and queer culture. While there are many other places today where you can find other alternative scenes or LGBTQIA+ spaces, it wasn’t always the case.”

“The Rocky Horror Picture Show” is a huge amount of fun. The audience gets to dance, laugh, and throw pieces of toast in the air. But to many, it is so much more than that. It is a world of its own, a gathering place where your differences bring you together. This is reflected in the cast’s answers to the question, “How would you describe Rocky Horror in one word”?

And the most popular response: “Family.”