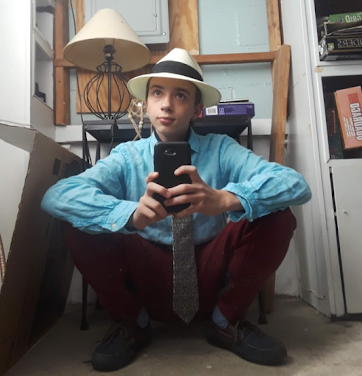 Michal Hajlasz is a style icon at Taylor Allderdice High School. His look is iconic and individual. Here is a rundown of what he wears, where it’s from, and how much it costs for those of you trying to imitate his amazing look.


The Classy Fedora
His hat is a Panama, which was popularized by Theodore Roosevelt but not actually made in Panama. “Mine was made in china,” said Michal, jokingly, after reciting the history of the hat style. When asked about why he wears a hat he said, “I need a haircut, so it hides my hair.” While this is true, it is also undeniable that it is extremely stylish. If you want to get this fedora, you can find it on Amazon. Michal said he got his for $40.
The Turtleneck
Who does not like Michal’s signature turtleneck? Although most people may feel turtlenecks are a risky fashion choice, Michal says, “I think everyone can pull off a turtleneck, [but] people just don’t try”. He referenced Steve Jobs and Dwayne Johnson, both known for iconic turtleneck outfits. Michal also thinks that the turtleneck and the button down “just look nice.” You can get this turtleneck for $10 at Target.
The Button-Down


The button down is a staple of Michal’s attire (it is rare to see him not wearing one). He chose this one specifically for this look because “it’s made out of linen so it’s good for warm weather.” He often wears his button-downs with a turtleneck, and when asked about why he does it, he said, “As a wise man once said, ‘you have to prioritize clout over comfort.’” This Ralph Lauren shirt was purchased from TJ Maxx for $35.
The Tie
Everyone agrees that ties are classy, but why did Michal choose to rock the tie the way he does? James Rankin said that his knots are “inspiring;” he often wears eldridge and trinity knots to show his clout. When asked about why he started wearing ties, Michal said, “We had a class in the gifted center, and Mr. Boyce taught us how to tie ties. I just had a lot of fun.” He’s been wearing them ever since. Michal also advises anyone considering wearing a tie to “go for it.” This tie is a bit harder to get because Michal got it from Florence for $20, but he suggests not getting silk ties for more than $20-$30.
The Pants
These pants are the newest item of clothing in Michal’s collection. On the color scheme, Michal said, “I feel like red and light blue go together.” This is a new type of pants for Michal. He normally wears corduroy, but the joggers are part of his new look. He also enjoys them because “[they’re] so comfortable.” You can find these joggers, you can go to American Eagle and get a pair of $20.


The Shoes
The shoes finish any look; wearing slides with khakis is like eating bananas with ketchup. Michal chose these shoes because they are “a good balance of dress shoes and casual shoes.” Also, the blue goes well with the blue shirt. These shoes are from G.H. Bass & Co. for only $50.
Delete Image
Align Left
Align Center
Align Right
Align Left
Align Center
Delete Heading