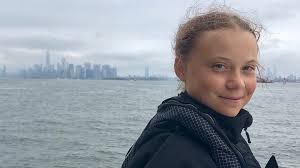 On August 28, 2019 Greta Thunberg stepped off of her zero emission boat into new territory; the America of the Trump administration, the one that pulled out of the Paris Agreement, an alliance aimed towards addressing environmental concerns, during June of 2017. This was no small feat for Thunberg as her trip took 15 days with her motorless and pollution- less boat, but as a part of her climate change combative platform the Swedish 16-year-old has given up plane rides.

Thunberg started out her activism in her home country of Sweden where she would protest outside of the Swedish Parliament. She then gave a speech at the 2018 United Nations Climate Change Conference. Needless to say, Thunberg is no stranger to taking extreme measures for her activism- she has since started a series of climate change protests that take place on Friday’s across the US, and across the globe.

She is now making her way across the country to educate about global warming, meeting with politicians such as Arnold Schwartzneger, going on the Trevor Noah show, and even receiving the key to the city of Montreal. Thunberg also made a speech to the UN in September, saying, “You are failing us. But the young people are starting to understand your betrayal. The eyes of all future generations are upon you. And if you choose to fail us, I say: We will never forgive you. We will not let you get away with this. Right here, right now is where we draw the line. The world is waking up. And change is coming, whether you like it or not.”

Paul Kim, an Allderdice senior and an organizer of Pittsburgh’s protest efforts, said of Greta and her work, “Greta’s impact has evidently spread across the entire world… you can see that she’s inspired an entire generation — or generations — of people to act on our climate crisis by bringing the fight to the streets every Friday. However, I would say that she has gotten overwhelming amounts of media coverage, and that’s great, but there have been environmental and climate activists long before her — especially indigenous and black folks, look at Autumn Peltier and Mari Copeny for example. It makes me think that these ‘movements’ only become popularized or legitimized once a white person comes to the front. [That being said] I truly admire Greta and I hope that people start to learn about other frontline youth who have been fighting these battles for a long time now.”

One of the biggest questions the American public had for the young activist when she got to New York was how she planned to address President Trump, who has made it quite clear that the environment is not his priority by way of measures such as pulling out of the Paris Accord and rolling back company regulations made during the Obama Administration that prevented companies from dumping chemicals and doing other environmentally harmful acts. To this, Greta replied that her plan is to educate as many people as possible because Trump will never listen. What Thunberg’s impact will be on the US and Trump is unclear, but it is clear that she is making a change.