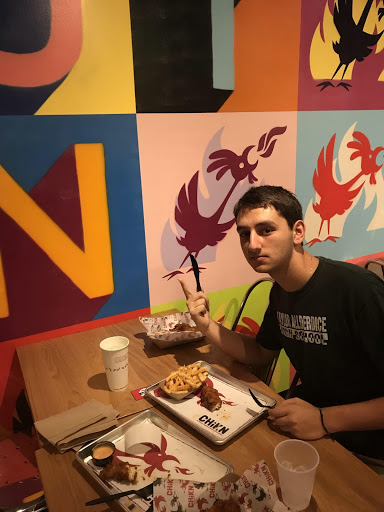 CHiKN is a hip, new, restaurant in Oakland with one specialty: chicken. There are four entrees on the menu, tenders, sandwich, salad, and CHiKN & waffles. With a limited selection, you better hope their chicken is good, and it is. Some of the Foreword staff journeyed to Oakland to tell you what this restaurant is all about.

We were welcomed by an inviting astroturf lawn in front of the store, walked in the door and saw a modern trendy interior that doesn’t overdo it. The menu was easy to choose from, and we ended up deciding to share 8 tenders (5 medium and 3 damn hot) and fries. An employee stated that the damn hot was made with carolina reaper, the spiciest pepper known to man.

The first floor was crowded, but the upstairs loft was relatively empty. As we entered, Jake said, “The modern and metallic aesthetic makes you feel as though you’ve stepped inside a Warhol (painting)”. The medium was first up, and it was almost disappointing. At first the chicken tasted dry, but half a second later, the savory juices rushed. Jake finished his extremely quickly citing the “very good bread- very soft chicken” as the reason. After a few bites of the oven baked, paprika covered fries, the time for damn hot was up.

The chicken required a proper toasting, the chicken was spicy. It hit right away and hard. Jake stopped talking for a bit and finally said, “Two bites and I’m sweating.” After a few seconds I started reciting a quote from one of my favorite movies, “I feel no pain” was the only thing that helped with the wrath of the fiery bird.

A few minutes had passed and the chicken was still fighting strong. “Do you think they’ll give me milk for free?” Jake asked. At first, it seems like the chicken will only burn for a bit, but it makes you feel like a dragon with every breath you take. Jake gave into his temptation, they gave him a cup for free. Jake almost finished it before he made it up the stairs, after slamming the cup on the table he asked, “do you think I can get another?”.

A half an hour later I had finished my damn hot chicken. The best combo of chicken is eating the damn hot dipped in their special sauce, then eating a medium tender tastes phenomenal. Jake also agreed trying it for himself, eating his chicken that way for the rest of lunch.

Other Foreward writers tried from the last tender that was boxed up. Junior Ian Denshaw said after his first bite “There is no God if this exists” proceeding to squirt lime down his throat to help with the pain. When offered, teacher Mr. Parker said “I’d rather eat my blueberry bagel”. The champ of journalism was Maya, who ate half of the tender in 3 big bites. Her only complaint was that her lips burned a bit.

CHiKN is a great option for anyone in the mood for chicken. A fair warning for anyone who downs the damn hot: clear your plans for the rest of the day. Enjoy your chicken everyone.