A Discussion with Mr. Henderson: Race and the CAS Program in Allderdice 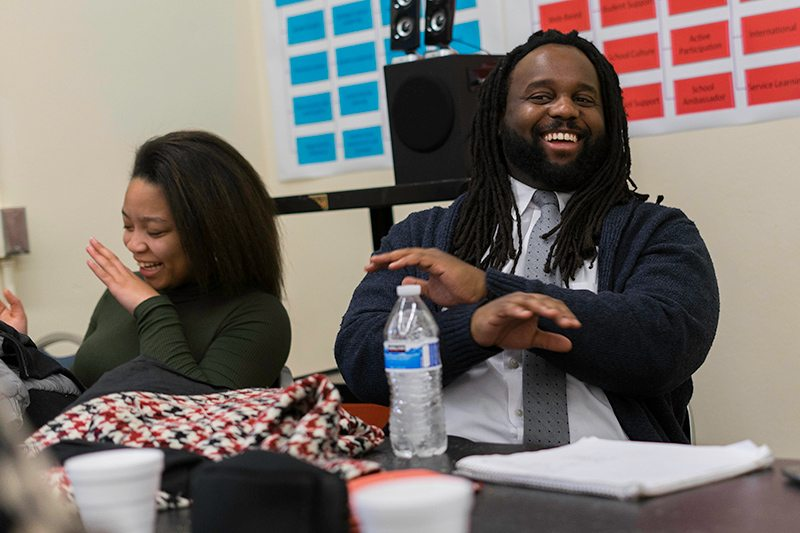 Despite the negative reception to his most recent plan, Mr. Henderson has enacted other plans throughout his position as the gifted and talented coordinator that have served to help students in minority groups, most notably black kids, get into the CAS program.  But at the same time, he is responsible for the slow removal of CAS history classes that is currently happening at Allderdice.

It’s clear that Mr. Henderson is a man of great controversy, someone who has enacted changes in the PPS district that have been both praised and heavily scrutinized.  So when the Black Student Union (BSU) invited Mr. Henderson to speak at one of their meetings, it seemed necessary to talk to him and make an attempt to understand his motivations and the effect that they will have on the future of the gifted and talented programs of the PPS District.

Mr. Henderson walked into the BSU room with a large smile on his face and almost immediately began joking around before taking his seat at the front of the room. Shortly thereafter, Mr. Henderson began to describe who he was and how he had gotten into his role as a gifted and talented coordinator: after working as a social studies teacher in the district at Brashear, he eventually moving up the CAS rankings until he got his current position.

Mr. Henderson continued, discussing the CAS program itself. He believes that the CAS program is a helpful tool for students that not only challenges them but also, because of its weighted benefit, looks good on college applications. Despite the benefits of this program, there aren’t a large number of students of color who take CAS classes and therefore miss out on the benefits given by this program. Any student of Dice would be able to easily confirm this through their own experience. CAS classes have a higher amount of white kids and kids from higher-income families while PSP classes have the complete opposite situation.

Henderson also had a lot to say during his discussion with the BSU and throughout the discussion and would often go off-topic from a question that was being asked on long passionate rants about issues like systemic racism. But despite these rants it never felt like he truly went off-topic, even if he clearly did, because with this rants he was able to tie together the issues that affect the black students of the PPS district that make them a small minority in talented and advanced classes and the higher amounts of punishment they receive in the district to the larger issues of racism in our society.

There are many obstacles that black students face, not just at Allderdice but in the PPS district and the United States as a whole, in school that a majority of white students don’t. Collectively all these obstacles make it harder for these students to get into CAS classes or even do well in school in the first place. The unconscious bias that some staff members may have led to a situation in which Allderdice punishes kids of color at much higher rates than their white peers. According to counselor Mr. Hall, who was also at the BSU meeting when Mr. Henderson visited, “38% of the Allderdice student body is students of color yet around 75% of the punishments (detention, suspension, expulsion, referral, etc.) given out by staff members are for this smaller part of Allderdice’s population.” This attitude of seeing black students as troublemakers creates a cycle of “bad behavior” where black kids and kids of color in general in our school are treated as more likely to behave worse and therefore are punished at higher rates which can be responsible for feelings of alienation; these students believe that no matter what they do they will be punished.

While much of what Mr. Henderson said seemed to be agreed upon by a majority of the people at the meeting there was one point that was brought up that had a more controversial reaction. When asked about the elimination of several CAS history classes and the reasons for this action, Henderson said that the removal of these classes is being done to encourage more kids to take AP classes which will hopefully make the advanced classes more diverse. The problem with this is that, as BSU sponsor and AP teacher Ms. Halloran mentioned, the diversifying of the advanced class has yet to happen. She says that her AP Government and Politics class that is open to a freshman is still majority white and/or upper-class. From my own personal experience in AP World History last year, a course which had its CAS alternative removed, I was the only black kid in my class and one of the two kids of color in that class.

Mr. Henderson talked about a lot in this meeting from issues like systematic racism to issues involving the CAS program and the intersection of both. While the student body and staff of Allderdice may not agree with everything Henderson does, for valid reasons, it is clear that he genuinely seems to care about providing more support and opportunities for the students in our school who are rarely given them.