Food Writer Priya Krishna is the Best of America 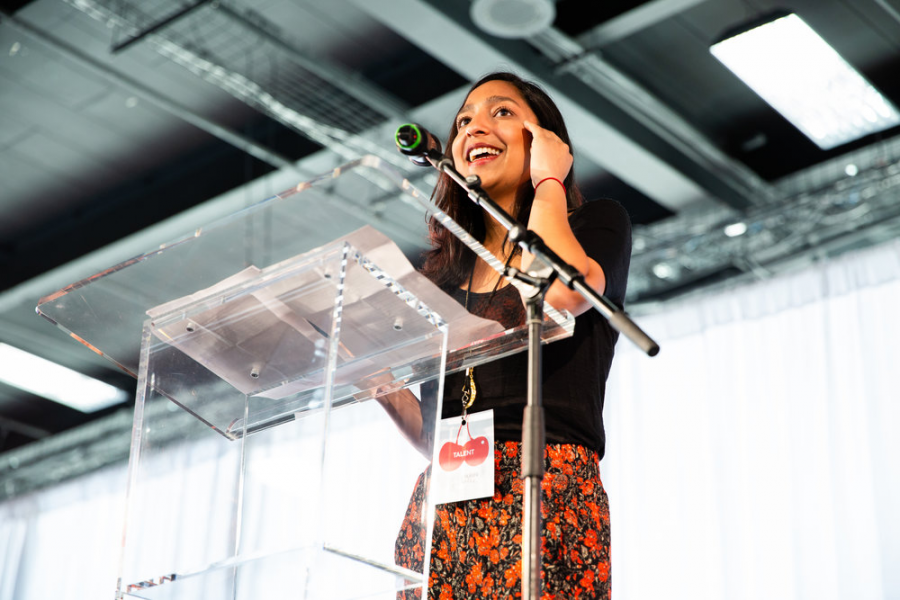 In the food world, 2019 was the year of Priya Krishna. She released her second cookbook, Indian-ish in April, and it instantly became a smash-hit, eventually being named one of the Best Cookbooks of Spring 2019 by the New York Times, Eater, and Bon Appétit. Krishna then embarked on an immensely popular national tour. She has been featured in countless articles, podcasts, and conversations in the food industry, revolutionizing how home cooks in America think about Indian food.

Amidst this rise to fame, Krishna spoke at the Cherry Bombe Jubilee 2019 conference, an event to celebrate women in the food world. A regular contributor to publications such as The New York Times and Bon Appétit, she talked about her initial desires to not be tokenized as an Indian food writer; she didn’t want to be confined to that label. However, she said that food and concepts of Indian origin were becoming more mainstream. “These things had existed in India for centuries and yet they were only getting attention when white people talked about them. I thought if I had this opportunity [to write about Indian food] I should take it. If I wasn’t going to be the authority on Indian culture, who would be instead? Some white guy who still says chai tea and ghee butter?”

Thus, Krishna established herself as a resource on Indian food, following in the footsteps of the legendary Madhur Jaffrey. Jaffrey brought the cuisine into the American cultural sphere with her 1973 book, An Invitation to Indian Cooking. “To put it simply,” Krishna told the Splendid Table podcast and radio program, “my cookbook would not exist without her cookbook.” Jaffrey has also been very supportive of Krishna.

In the era of “OK, Boomer” and cross-generational resentment, the relationship between Krishna and Jaffrey is remarkable and admirable. Krishna’s respect for older generations doesn’t end with Jaffrey; Indian-ish is a celebration of the cooking of Ritu Krishna, Priya’s mother. Ritu wrote over one hundred recipes for the book, and in the introduction to the book and each recipe, Priya lovingly expresses the background and significance of her mother’s food.

Further, in a New York Times Cooking video of Krishna giving a tour of her kitchen, she pulled out a jar full of mango achar (pickled mango) from her refrigerator and said, “The other thing that was really cool about being on book tour was random Indian aunties came and gifted me stuff, so someone gave me this.”

This dynamic between age groups truly epitomizes the magic of Krishna. She is leveraging her roots to succeed in the now, making the older Indian generation, who previously saw very little of their food culture in mainstream conversations, proud.

Krishna has been able to bridge the divide that many immigrants and children of immigrants feel between the US and their respective heritages. In fact, the title of her newest cookbook, Indian-ish, in addition to paying homage to her mother’s hybrid style of cooking, “is also about identity—that feeling of talking and thinking and acting like an American, but looking like an Indian,” Krishna wrote in the introduction of the book. “Part of two worlds, but never fully part of one.”

As a child growing up in a majority white community, Krishna was ashamed of her identity. Yet now, she writes in her book, “All the things that made me the awkward kid in school who didn’t eat and dress like everyone else—those have become my strengths as a writer. At some point, that deep shame and desire to hide who I was morphed into something resembling confidence.”

More and more immigrants or children of immigrants, like Krishna, are choosing to embrace their heritage, enriching the country in which they now live. Instead of bowing to white societal constructs, they are taking the bold action to make the United States a constantly changing cultural medley.

This is exemplified on the cover of Indian-ish, where a cartoon Ruti Krishna, Priya’s mother, is clad in a red bandana with an encouraging “YOU CAN COOK IT!” encased in a speech bubble: “an Indian-ified Rosie the Riveter,” according to Priya. Is there a better representation of the best of America than a brown immigrant as Rosie the Riveter on the cover of a revolutionary cookbook written by a multicultural first-generation millennial? You’d be hard-pressed to find one.