Why Schoology: Inside The PPS Learning Management System Decision 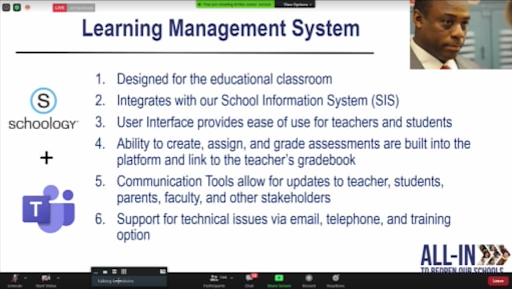 On July 14, Kevin Bivins, Assistant Superintendent of Pittsburgh Public Schools, announced in a virtual live hearing that the school district would be utilizing Schoology as a learning management system alongside Microsoft Teams for communication during the 2020-2021 school year.

“We know this won’t sit well with everyone,” Bivins said. “But the choice was made as to what was best for the district.”

After a challenging end to the previous school year, the Chief Academic Officer Minika Jenkins ensured that there would be an “improvement from remote learning [the district’s name for instruction last spring] to e-learning” in the coming months, including synchronous classes and an enforced grading system to the same caliber as previous in-person instruction.

This decision to use Schoology as the primary learning management system originated from the Subcommittee on Pre K-12 Curriculum, one of 14 subcommittees established the All In To Reopen Our Schools initiative to create a plan to start academic instruction amid the COVID-19 pandemic.

The subcommittee additionally decided that Microsoft Teams would be used for synchronous meetings, ruling out the ubiquitous Zoom platform for security risks exposed in the system over the summer. Additionally, the district has used Microsoft programs and has existing contracts for the Microsoft suite of programs from past years.

Composed of roughly 40 parents, teachers, administrators, and central officers—though, no students—the Pre K-12 Curriculum subcommittee met multiple times a week throughout June and early July with a primary goal of identifying which learning management system best suited the district and its unique needs. The committee also considered other issues, such as how classes had to be altered for the virtual setting and necessary changes to the school calendar, although these issues took a backseat to learning management system discussions.

Subcommittee members began discussions by creating a rubric by which to judge the potential learning management system options. Members were to create a list of criteria and rank each piece of criteria on a three-point scale in terms of importance to the district.

Moodle—a more antiquated system that was used by the district many years before—was quickly ruled out. “We kind of landed on Teams, Schoology, and Google Classroom. I think Moodle was dismissed pretty early just as not really being a good option,” said Jenn Mazzocco, a subcommittee member and teacher at Allderdice.

There was a similar sentiment about Microsoft Teams, especially after unsatisfactory results at the end of the previous school year. “Not a single person said we should stick with Teams in its entirety,” said Mazzocco.

However, conversations generally shifted after key issues were factored in, such as Schoology’s ability to operate alongside the district’s grading system and automatically migrate class rosters from the grading system into Schoology. In Google Classroom, each class roster would have had to be manually entered. Ultimately, there was a general belief that Google Classroom’s functionality was limited in comparison to Schoology.

Schoology also offered more comprehensive accessibility options, which was a major concern for Allderdice parent Ali Patterson, a faculty member at the University of Pittsburgh well-versed in hybrid and online learning. “[With Google Classroom], students would have to have been invited to their classes and then accepted the invitation to their classes,” she said. “Now can you imagine how that would work with executive function issues or ELL [English Language Learning] families or for the children that we were already having a hard time reaching.”

And while there was general consensus, when there was a vote to determine the subcommittee’s official recommendation to Superintendent Hamlet’s Executive Council, a select few members held their ground with Google Classroom, even asking for a second vote to ensure Google Classroom was appropriately considered. While Mazzacco ultimately supported the district’s decision to use Schoology, she suggested “it felt a bit like [the district] knew what they wanted to do, and they wanted us to rubber stamp it,” noting that after many hours of meetings, the district ultimately decided to use the system it already had.

While the learning management system decision has shaped the way students across Pittsburgh Public Schools have engaged with their peers and teachers this school year, the choice of system may not be significant. “At the end of the day, all of these tools are just tools,” said Harbin. “You pick one, you support it real well, and you train everyone to use it effectively. And it’s not the tools that matter as much to me. It’s the content and the teachers.”